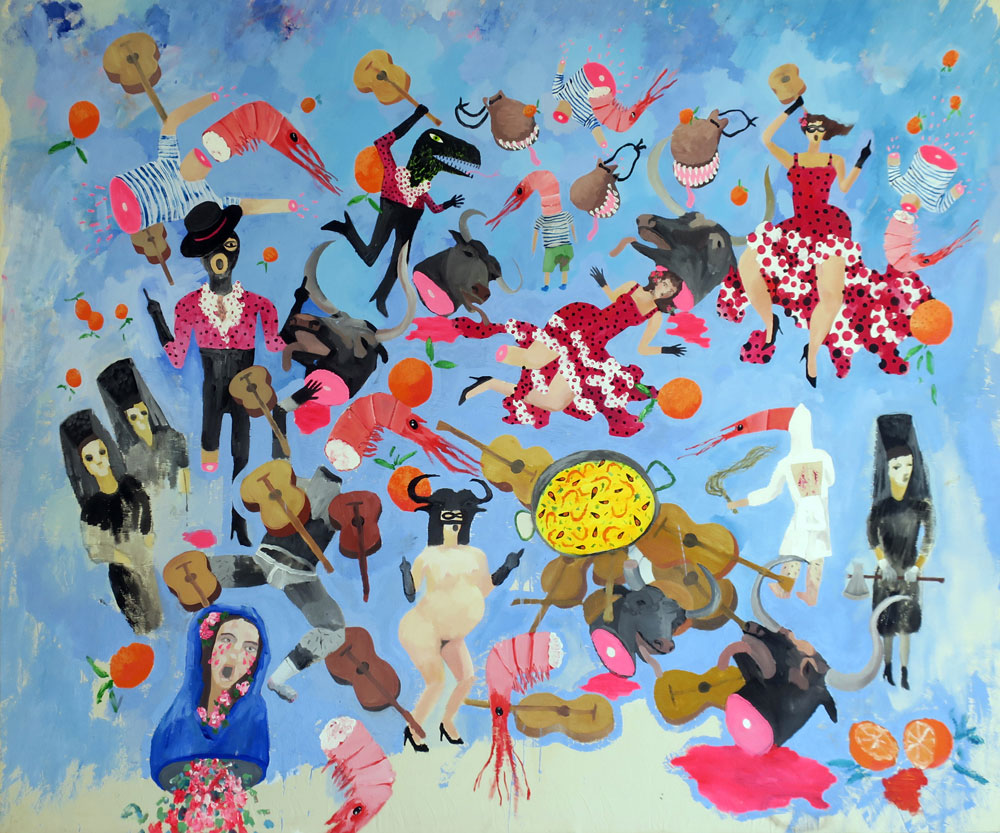 Evil Castañuelas And The Cementery of Spanish Guitars
2015, acrylic on plywood, 175 x 200 cm

Antonio Asensi Gallardo’s painting can be labeled as Spanish, as some of its elements make a direct reference to Spain, a country with a strong tradition of artists who represent it in terms of the esperpento, the typically Spanish form of the grotesque, as perhaps it is the only valid means of representation.

The artist constructs his work on the basis of perfectly recognizable icons, inscribed into the collective imaginary of this entity called Spain, as well as into that of many foreign places. But even if his painting is ‘Spanish’, this is not the result of a vocation or a choice, but an accident. The fact that many of the signs Antonio employs can be identified as pertaining to a specific geographical and cultural context does not constrict its universality in the slightest bit.

One can also state that Antonio’s painting is just a little bit wacky because it depicts moments of folly, but in a fundamentally narrative manner. A narrative of the nonsensical, of the absolute absence of reason. With a bold touch of color, festive and fragmentary, it is pure style in the service of esperpento, of kookiness, of the crude reality it so vividly represents.

Antonio’s works speak to us about the fabric our world is made of, they speak of situations and emotions, and they do so with humor, keen wit, sweetness, compassion and a ton of critical sense that, refreshingly, avoids any kind of label or affiliation, which makes it all the more effective. Antonio lights his lantern of the involuntary sewage worker as he descends into the netherworlds of our time, illuminating its grimy walls and transmitting his findings.

His characters, mostly quotidian but sometimes also of a certain fame, are archetypes that range from misery and stupidity to vulnerability or conceit. They are, above all, X-rays of the human soul. We find grandmas next to beggars, folklore girls, or pathetic figures from long démodé reality shows and reptilians resembling tyrannosauruses, for these were, as the artist puts it, ‘kings’ and ‘tyrants’ at the same time. Objects also come alive on his canvases, as they join in the fun: paellas, guitars, knives, sunglasses. In sum, an entire bestiary.

Displaying an abundance of nuances, of both implicit and explicit messages, and, above all, a chromatic lavishness, Antonio’s painting is indispensable in a world that has become increasingly mediatized by cold and somewhat forced discourses, which often times exhibit an underhanded intellectualization or a pledge of allegiance to the vacuous label of contemporaneity. Thus, presenting Antonio’s ‘National Bestiary’ as our inaugural show is not the result of mere coincidence, but a point of departure that already reveals quite a lot about our future curatorial line.